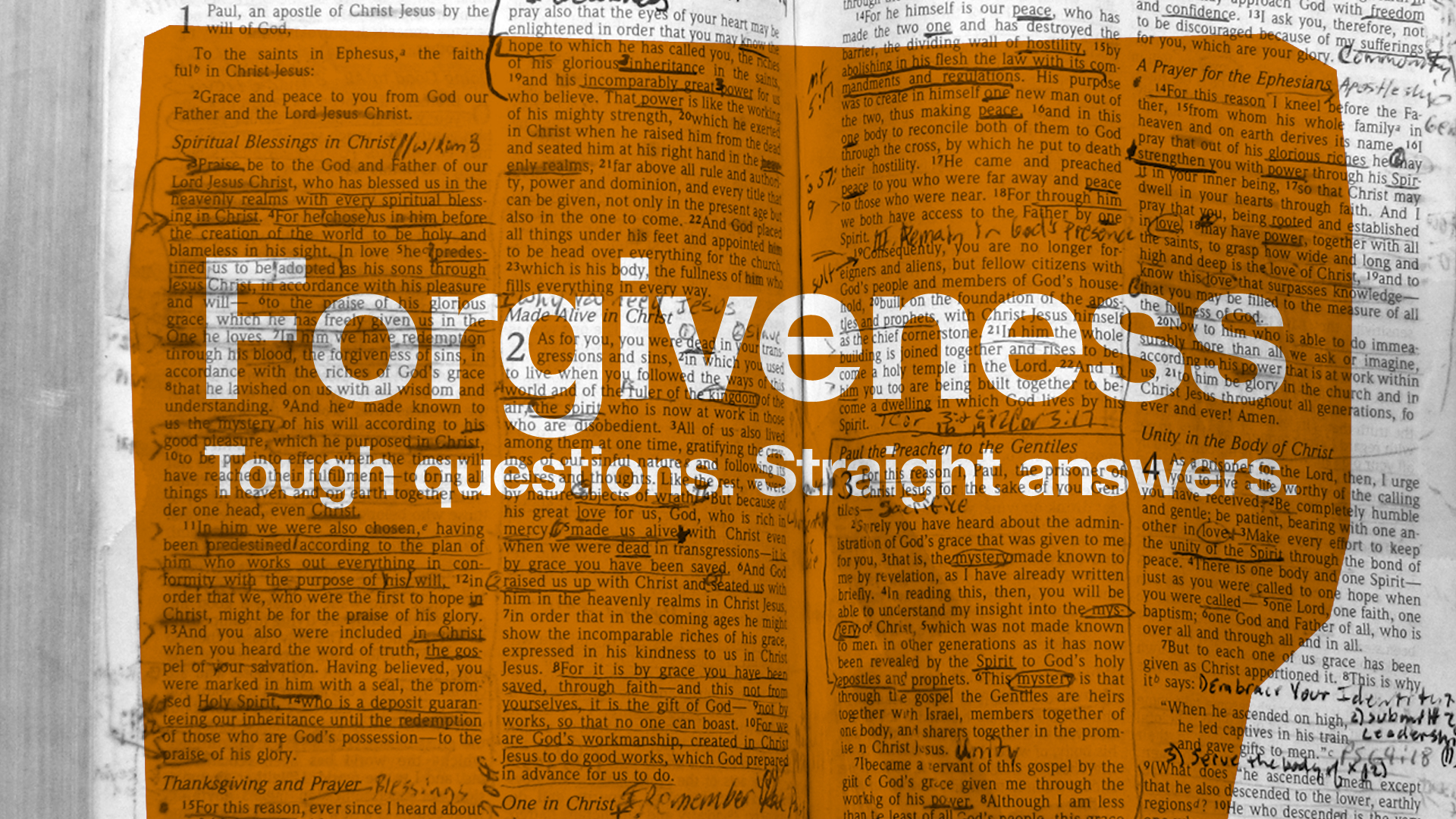 There can be some confusion regarding the theme of forgiveness; what it is, when to apply it, or why even apply it at all. In the news when I was writing this message was the case of Manson Family multiple-murderer Susan Atkins. Atkins was terminally ill with brain cancer, has been incarcerated 40 years, has had one leg amputated, and is bed-ridden due to being paralyzed over 85% of her body. Some made the case for her to be released from prison for compassionate reasons. Yet others made the case that no mercy is warranted or deserved due to the horrific crimes intentionally committed. The scriptures teach forgiveness, but what does that really mean? My friend Kevin Jones and I discussed this, and that led to this message. The outline is his and I thank him for it. Let us consider some issues concerning forgiveness and the idea of compassion.

Forgiveness – There is not a shadow of doubt concerning the Biblical mandate to forgive. Paul writes in Ephesians 4:32 And be ye kind one to another, tenderhearted, forgiving one another, even as God for Christ’s sake hath forgiven you. Paul is writing to the Christian community. This is the behavior incumbent upon Christians. We have been forgiven much, and we are in turn to forgive. Part of being conformed into Christ’s image includes forgiving. Did not Jesus himself on the cross pray in Luke 23:34 Then said Jesus, Father, forgive them; for they know not what they do. To forgive is akin to pardon. To allow a wrong to not be punished. This means it’s in the power and the right of the offended party to forgive. Regarding our own sins, God Almighty made a way, since it was against Him we have sinned, to have those sins forgiven, and that came by way of the cross of Christ. Colossians 2:13-14 And you, being dead in your sins and the uncircumcision of your flesh, hath he quickened together with him, having forgiven you all trespasses; Blotting out the handwriting of ordinances that was against us, which was contrary to us, and took it out of the way, nailing it to his cross. Forgiving is simple but not easy; it is contrary to our sin nature and without the help of the Holy Spirit forgiving is well nigh impossible. When Jesus was resurrected and appeared to his disciples he said to them in John 20:21-23 Then said Jesus to them again, Peace be unto you: as my Father hath sent me, even so send I you. And when he had said this, he breathed on them, and saith unto them, Receive ye the Holy Ghost: Whose soever sins ye remit, they are remitted unto them; and whose soever sins ye retain, they are retained. Thus the first thing Jesus taught after his resurrection was the theme of forgiveness. Further, he taught that if you don’t forgive the offenses (remit), then they are retained even on you. So who needs that?! Better to forgive, with God’s help, then to remain unforgiving and bear the penalty of that sin that was committed against you. This is Holy Ghost ground, beloved, when it comes to forgiving others who have done something horrible and heinous against us. Only God can help a person to forgive under these conditions, but God is big and that’s how it works, if we’ll cooperate with the Holy Spirit and let God do his work in us. Now, when we forgive, we are releasing, yea, remitting (releasing) that very offense from its hold on us. Think of those burned up with unforgiveness – they seethe and stew until a physical toll overtakes them. They are paralyzed with unforgiveness – hatred, thoughts of revenge, attitudes that are not unto edification. The very offense committed against them is that which continues its wreckage in their lives and the lives of those around them. This is the reality of unforgiveness, and it’s why Jesus and the apostles stressed forgiveness so much. Forgiveness is to be given, even when it’s not asked for and even when we think it unjustified!

Trust – Now we come to an attribute that is not necessarily given, but, rather, is earned due to behavior, or lost due to behavior. Concerning forgiveness, when it comes to trust they are two different actions. When we forgive it does not mean that now we trust the forgiven party. The great messianic Psalm, chapter 23 verse 4 says Our fathers trusted in thee: they trusted, and thou didst deliver them. Here the Psalmist is declaring that their fathers, or ancestors, trusted in God and God delivered them out of trouble. So God can be trusted because of His behavior, His consistency, His steadfastness, His faithfulness, and on and on. Today Christians trust in God because God had been faithful in our lives. He gives peace, He gives comfort, He gives direction. Yet we know full well people are not always this way! People can let us down. People have let us down. Seventy times in the Psalms alone the word “trust” is used, almost always referring to God Almighty. So concerning forgiveness, we can forgive and should, but we don’t have to trust another. There is a difference. Trust is earned, forgiveness is given. A person who has wronged us can be forgiven, but for them to earn our trust, well, that takes time.

Respect – This is an attribute that, like trust, is earned. We earn this through behavior, accomplishments, and by what we can contribute. Concerning forgiveness, we can forgive someone but not respect them or what they have done. It doesn’t mean we hate them, it doesn’t mean we wish them ill. It means that they perhaps have violated a trust, even a sacred trust, and they have lost the right of respect. This can be regained over a protracted period of time where respectful behavior and diligence to accomplish is carried out. Respect can be looked at in some sense as “honor.” Honor can come by title, but it can also come by accomplishments. Respect can be abused, and be used as a way to lift some up while putting others down. But proper respect comes from long-term consistency in conduct and includes accomplishments. Consider the word of God as recorded in Leviticus 26:9 For I will have respect unto you, and make you fruitful, and multiply you, and establish my covenant with you. God himself showed respect to his chosen people, and by doing so demonstrated it by acting accordingly, and benefiting them. When we respect someone we demonstrate it. When we have been wronged we honor God by forgiving and we benefit ourselves by forgiving, but to respect the one who wronged us, that is not required. It may or may not come with time.

Accountability – This can be one of the most confusing areas concerning forgiveness. Just because a person has been forgiven, does not mean that they are absolved of their accountability for those actions. The individual can forgive, but the laws of men and of God still require accountability (responsibility) for offenses. Some of those offenses warrant stiff penalties, and this is God’s way for any number of reasons. One reason for the penalty is to compensate, if possible, the offended party, the other is to compensate and protect society as a whole. Consider Hebrews 13:17-18 Obey them that have the rule over you, and submit yourselves: for they watch for your souls, as they that must give account, that they may do it with joy, and not with grief: for that is unprofitable for you. Pray for us: for we trust we have a good conscience, in all things willing to live honestly. There is a godly accountability that persons in society have to the leaders of society. God ordained government and government doesn’t bear the sword in vain. They will be accountable to God, and we will be accountable too. So if we are offended, we forgive, but the person forgiven must still submit to the cost of those offenses.

Compassion – We now address the subject of compassion concerning forgiveness. Mark 6:34 And Jesus, when he came out, saw much people, and was moved with compassion toward them, because they were as sheep not having a shepherd: and he began to teach them many things. Having compassion is not just letting someone off the hook or feeling sorry and moving on about your business, it includes doing something they need and which can benefit them. Jesus, in this passage, was moved with compassion because of the state they were in (not having a shepherd) and so he did something for their benefit (he taught them many things). Compassion is not always easy – even here in this example the compassion of Jesus moved him to act. When our missionary teams travel overseas our donors give because they have compassion on those in prison and they desire a good work be made available to them. Donors may not respect what a foreign prisoner has done, may fully want them to be accountable for what they’ve done, but they still have compassion on them and demonstrate that by doing something they need, that is, by the sending of a missionary there to share the Good News of Jesus Christ, to bring humanitarian aid to the hungry, to bring blankets and clothes to the naked, and even to minister medicines to the sick. That’s real compassion – doing something to benefit the other person that comes at a personal price.

In my own life I have had some horrible things spoken against me, and I’ve had some evil things done against me. Once I had to take a matter before a judge and jury. I had forgiven my adversaries early out – that was God’s will. Still, I pursued the matter and won a proper judgment because I believe in accountability. Do I respect my adversaries? Not at all. Not now anyway. Do I trust them? Not a one of them, they violated that. Will I pal around with any of them? No. But I did forgive them and my heart and conscience is clear. So what about Susan Atkins? Should she have been forgiven? Forgiveness is God’s way. Should she be trusted? That’s for those associated with her to determine based on her conduct over a long period of time. Should she be respected? That must be earned. Should she be accountable even when forgiven? The laws of man and of God say yes, and she continued to be accountable for her actions, even actions committed 40 years ago. Should she be shown compassion and released to die at home? Two sides argue that point – but showing compassion to her by a release could well damage the family of the victims and might not be showing compassion to them. Where is the benefit? What price is paid for compassion? Susan Atkins died in prison, never having been released. The best thing Susan Atkins could have she already had, and that is by her own testimony she has taken Christ Jesus as Savior, and God had forgiven her according to His Word. That’s the best thing that can happen to anyone. Has it happened with you?